An LED pixel is a cluster of 1 or more LEDs. Full-color pixels feature red, green, and blue LEDs or diodes.  Using red, green, and blue diodes, the control system of an LED sign can increase or reduce the intensity of each diode to create the color desired for the image being presented.  The face of an LED sign is typically a black, high impact, ABS plastic and thus when a diode or pixel is not illuminated, that section of the sign appears black. 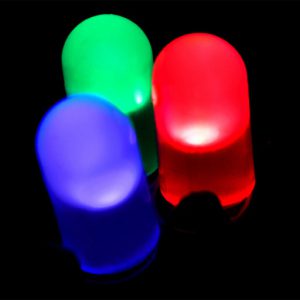 Light-emitting diodes (LEDs) are a semiconductor light source that emits light when electrical current flows through the Cathode and Anode (negative and positive connections).

Electrons within the semiconductor recombine with electron holes, releasing energy in the form of photons.  The color of the light corresponding to the energy of the photons) is determined by the energy required for electrons to cross the band gap of the semiconductor.LEDs have many advantages over incandescent light sources, including lower energy consumption, longer lifetime, improved physical robustness, smaller size, and faster switching.

Part of a quality LED school sign includes quality components such the diodes/LEDs themselves.  Golden Rule Signs carefully selects quality components on all levels including diodes/LEDs.  Diode selection can dictate brightness, viewing angle, color temperature, failure rate, and many other factors that contribute to the cost, longevity, and appearance of your LED school sign.